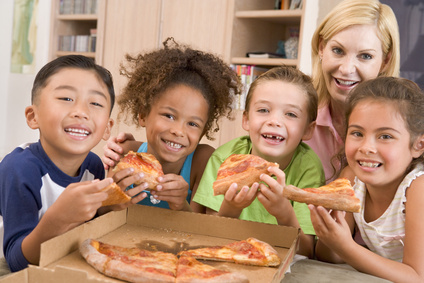 All things in moderation: A mantra that always seems to come back when we talk about healthy eating.

The Today Show recently discussed the work of Rutgers University Psychology professor, Charlotte Markey, who similarly argues that parents should let their children eat junk food sometimes. Restricting sweets and treats all together is counterproductive. Instead of forgetting about the foods, children focus more attention on these restricted foods, giving them extra appeal and mystique, and pushing children to crave the foods even more.

So, what should parents do instead?

Act as a role model.

Follow the same diet, and eat the same meals as your children. Kids, especially younger ones, act as copycats. By seeing mom and dad eat healthy, they will gradually pick up the same behavior.

Keep junk food out of the house.

Fill your house with healthy snacks and give your kids free access to them. Along with this, take your kids out for an occasional treat, like ice cream, but do not have ice cream in your freezer all the time.

Instead of letting your children choose when to eat unhealthy foods, offer dessert with some meals in a single-serving portion. This method allows your family to indulge in the occasional sweet in a healthy amount.

Teach your children about portions and proportions.

Focus on serving sizes. Allow your children to eat sweets but teach them that we should eat more healthy foods.

Got a Food-Obsessed Kid? Research Warns: Don’t Restrict Them

Psychology Today: Should You Let Your Kids Eat Junk Food

Today Parents: Why you should let your kids eat (some) junk food