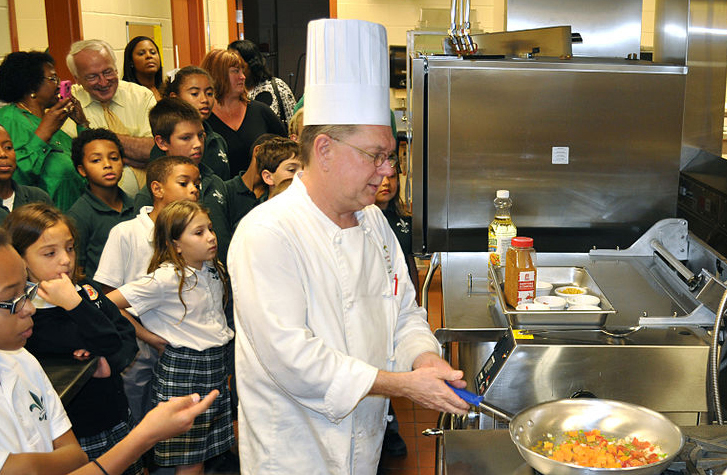 First Lady Michelle Obama is calling on chefs to join the fight against childhood obesity by adopting a school and working with teachers, parents, school nutrition professionals, and administrators to show students that healthy eating can be fun. The Chefs Move to Schools program seeks to utilize the creativity and culinary expertise of chefs to help schools ensure that America’s youngest generation grows up healthy. Founded in May 2010, it is an integral part of First Lady Michelle Obama’s Let’s Move! initiative and its goal of solving the childhood obesity epidemic within a generation.

In Beverly, MA, Chef Kirk Conrad visited seven schools twice a week for five months to train and teach school nutrition staff about healthy cooking techniques. As a result, schools now offer deli bars and fresh, made-to-order omelets- both of which have been exceedingly popular among students. Another big move? Now, 70% of foods served in the cafeteria are made from scratch (compared to ~50% before the program started). All sauces, condiments, and meat dishes are prepared in-house from minimally processed products.

Students in Upstate New York were similarly treated with five new-and-improved entrees in one study by the Cornell Center for Behavioral Economics in Child Nutrition. The professional chef observed student preferences in the cafeteria and created new National School Lunch Program-compliant dishes accordingly. Researchers used tray waste data to compare consumption of normal entrees and these new products and found that, while students ate about the same amount of their entrée as before, they increased their vegetable consumption by 16%! Researchers speculate that this change was due to the appealing pairing of pizza and salad.

Six months after the program started, more than 1700 schools had signed up to connect with a chef through Chefs Move to Schools. As of February 2, 2012, almost 3,500 schools were partnered with professional chefs. By taking advantage of this unique opportunity, both parties are sharing success in their efforts to teach students about food in a fun and appealing way.