There is substantial evidence that children are not eating the recommended amounts of healthy fruits and vegetables. In an effort to motivate children to eat more fruits and vegetables, school cafeterias are now required to offer a fruit or vegetable for every meal, and students must select a minimum of one-half a cup of fruit and/or vegetable with each lunch meal. Though marketing unhealthy food to children is highly criticized, little research has been conducted to show the effectiveness of healthy food marketing to improve children’s diets. To better understand the potential role of marketing healthy foods to children, researchers at Cornell University’s Center for Behavioral Economics in Child Nutrition Programs conducted a study to measure the impact of two media types in increasing vegetable uptake among children.  These two media types were short movie segments with vegetable puppets talking about the benefits of fresh produce and a vinyl banner wrapped around a salad bar with pictures of these same vegetable puppets (see images below). 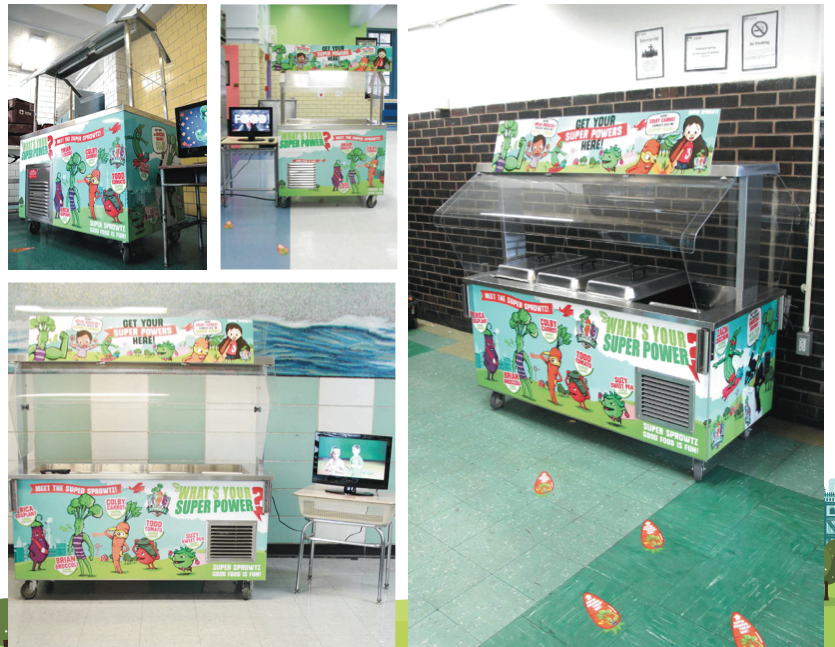 The study lasted a total of six weeks in 10 elementary schools.  The first two weeks established baseline behavior  and the final four weeks acting as the intervention period.  During the intervention period, either the vinyl wrap-around banners, televisions, or both were installed in the assigned schools. In collaboration with Founders Farms, Super Sprowtz graciously donated the televisions and vinyl wrap-around media for this study.  These SuperSprowtz characters are fictitious live vegetables that have super powers.  In all the schools, small decals were also placed on the floor to direct traffic to the salad bars.

Based on food preparation records available from the cafeteria, in schools with the TV media and vinyl banners wrapped around the salad bars, there was an increase of 287% in the number children taking vegetable and salad servings per day.  In schools with either the TV or banner, increases in the number of children taking vegetables and salads were noted, though not statistically significant.

While marketing unhealthy food to children has historically been criticized, the strongly positive results of this study highlight the value of marketing healthy options to youngsters. Persuasive influences of marketing media can be leveraged in a positive way by encouraging children to make more nutritious choices. Additionally, it is relatively inexpensive to implement marketing tools in schools, such as descriptive names for healthy options and attractively displaying fruits and vegetables.  In the context of this study, the initial cost of purchasing the media might incur a non-negligible expense, though the media can be used again year after year.