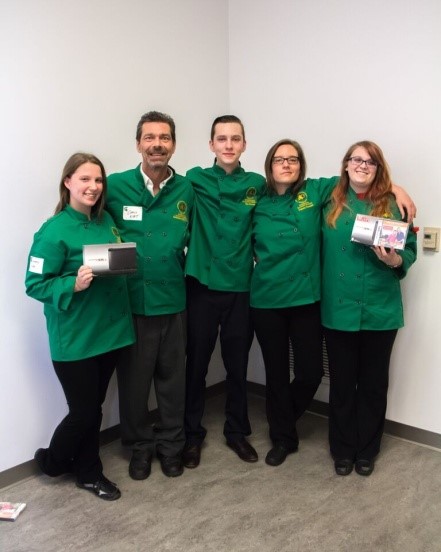 High-school students in the culinary arts program, offered through a partnership between Northern Michigan University and the Marquette Alger Regional Educational Service Agency (MARESA), love a challenge, and that’s just what they got when they signed up for the Michigan Junior Chef Competition, which was held May 15, 2015.

Although the other young competitors certainly gave the budding young MARESA chefs a run for their money with creative and exotic new school breakfast dishes such as Blueberry Oatmeal Sundaes, Breakfast Egg Rolls, and French Crepes with Potato Hash, the MARESA team won the hearts  – and taste buds –  of judges by putting a new spin on a classic favorite, the breakfast sandwich.

The MARESA Junior Chef team consisted of high school students receiving credit for studying culinary arts at Northern Michigan University. Team members unanimously agreed that they could not have won the competition without the help, guidance, and support from their mentors/instructors/coaches Chris Kibit, CCE CHE, and Loganne Boersma.

The task for this year’s Junior Chef competitors was to develop a creative, fully reimbursable school breakfast that could easily be replicated and served to students across the state. MARESA’s Hearty Flatbread Sandwich, included cooked egg whites, onions, spinach, hash browns, mushrooms, and tomatoes – a delectable combination that took first prize. The egg and veggie mixture was topped with fresh basil leaves and a spicy Sriracha-lime sauce and served on hot, pressed  Naan flatbread. To make the breakfast reimbursable, the sandwich was accompanied by a yogurt parfait made with plain Greek yogurt, blueberries, raspberries, peaches, blueberry puree, and homemade granola. 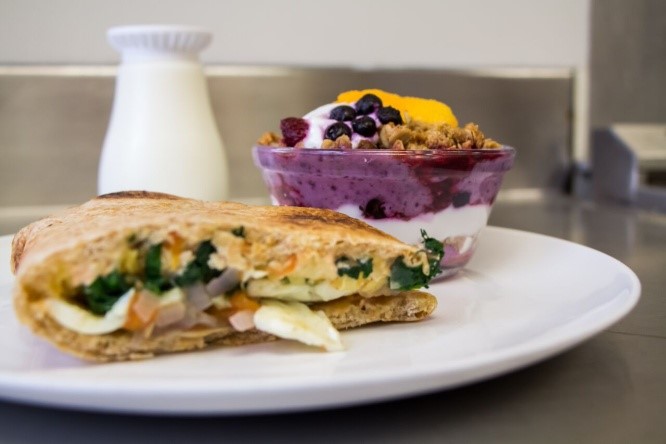 “We worked so hard for this win,” said student chef Joe Warner. “We all spend so much time cooking and talking about food… it’s our life. We were so excited for a chance to complete. After all we’ve learned, from cooking techniques to sanitation to marketing, the competition gave us a chance to show off what we know. Being in this competition was an amazing experience!”

For their win, team members of MARESA each received a Nintendo DS and MARESA received $750.