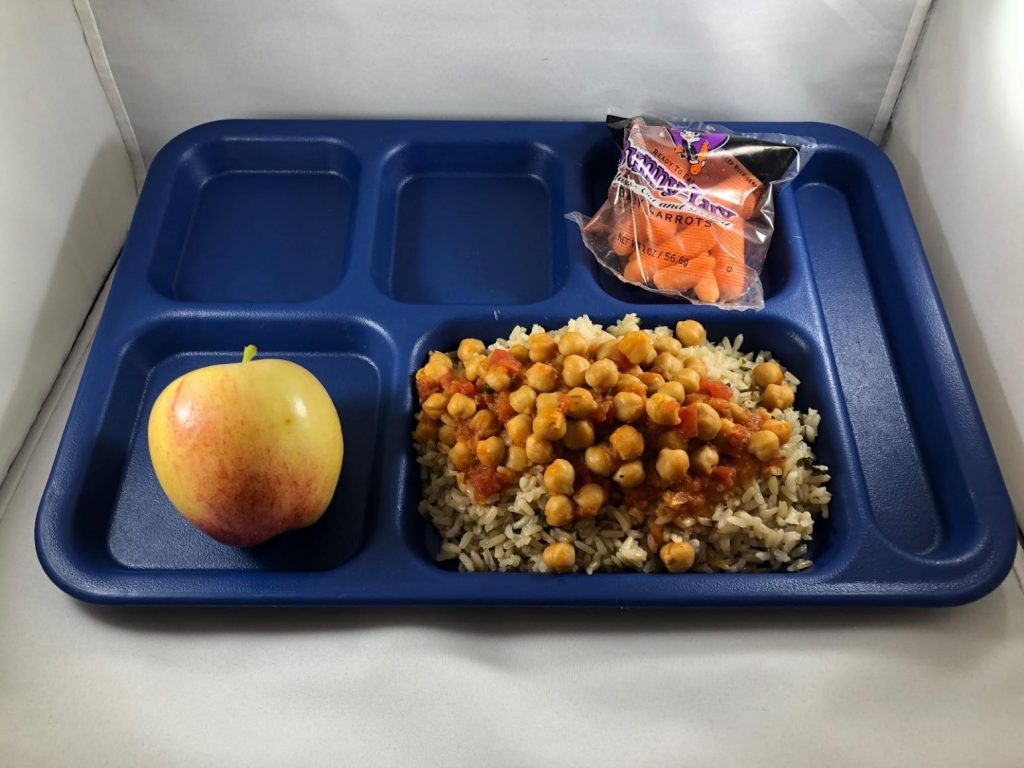 Kelly Diaz, RD, the Assistant Director of Nutrition Services at Evanston Township High School (3,500 students) in Evanston, IL, implemented a Meatless Monday initiative during the 2018-2019 school year. Her experiences provide excellent examples of how this program can benefit students and lunchrooms. She also offers ideas for addressing challenges during the coming school year.

Kelly brought Meatless Monday to her school for a number of reasons. As a registered dietitian, the health benefits of plant-based foods appealed to her, as did the environmental message that plants demand less water and other resources than equivalent amounts of meat. She also wanted to showcase plant-based foods from other cultures, as her diverse district includes students of many nationalities and food traditions.

She was assisted in starting the program by Karla Dumas of the Humane Society’s food service arm, Food Forward. Together, they determined recipes for the school year on a 3-week rotation based on NSLP nutritional regulations, students’ preferences, and the school nutrition staff’s cooking skills. Then Karla traveled from Florida to present to Kelly’s staff the reasons behind the Meatless Monday program. A key part of the preparation was this short video, which “was a real eye-opener” for the staff. She then trained them to prepare the selected food items. The district employs a central kitchen which sends bulk meal items to its sister K-5 district, impacting an additional 1,800 students daily. These schools were also committed to Meatless Mondays for a city-wide effort.

Kelly’s district also prepared the students for Meatless Mondays by sending emails and letters to administrators, staff, and parents. Weekly PA announcements on Monday mornings shared facts about the environmental impact of meat production and prepared the students’ palates for the featured entrees. The discussions of water, fuel, and land usage resonated with many of the students.

Once the school year began, so did Meatless Mondays! Each Monday, the cafeteria staff offered up to SIX meatless entrees, using signage and labeling to promote each meal option. The foods were plated beautifully and paired with side dishes that enhanced their flavors; for example, jalapeno cornbread complemented the seasonal veggie chili.

Familiar recipes, such as cheese pizza and fajita veggie-and-bean burrito bowls, were quite popular. Less familiar items, such as falafel wraps and chana masala (chickpea/garbanzo beans in tomato-based sauce), were slower to take off. However, their presence on the serving line was very impactful for students who were less accustomed to seeing options on the line that were representative of their culture. Kelly recalls a heartwarming occasion when a student pointed to the falafel pita sandwich with hummus and Jerusalem salad (tomato, cucumber, and parsley) and said with pride, “That is from my country!”

The teacher and staff dining room also participated in Meatless Mondays, making this a school-wide initiative.

Lastly, convenient items such as grab-and-go entrees and snack boxes were popular.

Like any program in its first year, this initiative encountered some hurdles. Chief among these was that lunch participation remained about the same (just under 40%) and on some days decreased from the expected numbers or from the numbers of the other days of the week. The environmental and humanitarian messaging resonated with some students but not all of them. Other students ordered new items but altered the recipe (such as requesting a falafel pita without the hummus or Jerusalem salad), and then disliked the end result (saying it was too dry). Sales were lower on unfamiliar recipes and those where students could not see all of the components, such as ravioli or enchiladas. It was discouraging to team leaders and staff to have to remove less popular items from the menu due to low sales — they work hard at providing equity to their students and felt some cultures may have felt disregarded. Lastly, staff had to make operational adjustments to accommodate preparing the new items.

In order to build community support for another year of this program, Kelly has reached out to leaders both within the school and in the wider community to provide operational and financial support for the program. She is also considering different approaches for connecting with students and raising awareness of the program as well as operational changes to make plant-based foods more accessible and appealing to students. These are possible approaches for Year 2:

The goal of these interventions is to broaden the appeal of plant-based meals, increasing participation and making Meatless Meals a permanent addition to the school lunch menu. Kelly is heartened by the cyclical nature of the academic year: “Each year, we get a new class of students who have never known anything different. If we can integrate this program for the next year or two, soon all of the students will know it as part of our district’s culture.”

A PDF version of this article can be found here.