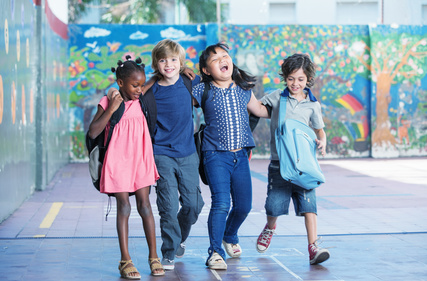 Blue Zones® is a health and wellness initiative founded by Dan Buettner.  He travelled all over the world researching communities.  The areas that he found to be the healthiest with the greatest longevity he named the ‘Blue Zones.’

The Blue Zones were built upon the Power 9® Principles.  Of those principles, the three that resonate most with school wellness are: the 80% rule=eating until you’re 80% full, not stuffed; plant slant=fill your plate 2/3rds of the way with fruits & vegetables; & move naturally=meaning, just move every day.  It doesn’t have to be cross-fit or an elaborate, expensive exercise program.  Take your dog for a walk.  Work in the garden.  Play with your children or grandchildren.

Oskaloosa is a small town of approximately 10,000 people in southeastern Iowa.  It is a rural farming community, like the majority of our great state.  Currently, approximately 14.8% of residents are living below the poverty level.  The per capita income is $28,555/year.  The Mahaska County United Way Community Data report states that 28% of local adults are obese, & the number of fast food restaurants per capita is more than double the national average.  In other words, Oskaloosa was the perfect place to begin creating a culture of wellness!

Oskaloosa Elementary School (OES) is the largest elementary school in the state of Iowa.  It is home to 1,100 K-5 students.  Becoming a Blue Zones® school was no small task!

In order to become Blue Zones® certified, OES had many points of validation to pursue.  A project blueprint was created; guidelines were put in place; and policies were established.  The school meal programs (note: Oskaloosa Community Schools participate in both the National School Breakfast Program & the National School Lunch Program) and the Physical Education Department were already in compliance, so that was a major boost.  Other initiatives were created, such as:

The Blue Zones® Project garnered much feedback amongst the community.  Many in the community were in favor of the project, however; some were very resistant to it, including the Oskaloosa City Council and members of the Oskaloosa School Board.  At OES, the students were the biggest supporters of the project.  It took much longer for staff to get on board.  To date, many of the OES staff is in favor, but there is still work to be done in this area.

Cathy Drost, OES Wellness Committee Chair, and parent, had this to say:  “The Blue Zones® Project in Oskaloosa has been an exciting journey of bringing many community members together to work on a common goal of improving the well being of our city.  The process has impacted me by allowing some of the wellness efforts that have worked in other communities to get started in Oskaloosa.  It has been exciting to have my whole family involved with various events and the positive impact it is having on my children through the choices they make each day.”

Thomas Richardson, Oskaloosa School Board President, and parent, also stated: “The largest impact that The Blue Zones® Project has had on our students & staff is the mantra of ‘making the healthy choice the easy choice.’  That’s something that all students & staff can live by, & take home with them each day.  As far as developing a continuing culture of wellness, OES needs to be continually on-boarding all new staff & students just like we did the first year.  If all are kept informed & enthused about the Blue Zones, then we’ll continue to have people working to keep the ball rolling.”

The Blue Zones® Project is alive & well in Oskaloosa.  Next up: designating Oskaloosa Middle School & Oskaloosa High School as certified Blue Zones® schools. The deadline: May 2016.  Work has already begun on these designations.  Oskaloosa is proud to be a wellness leader in the state of Iowa!

To learn more about The Blue Zones® Project, visit these sites: