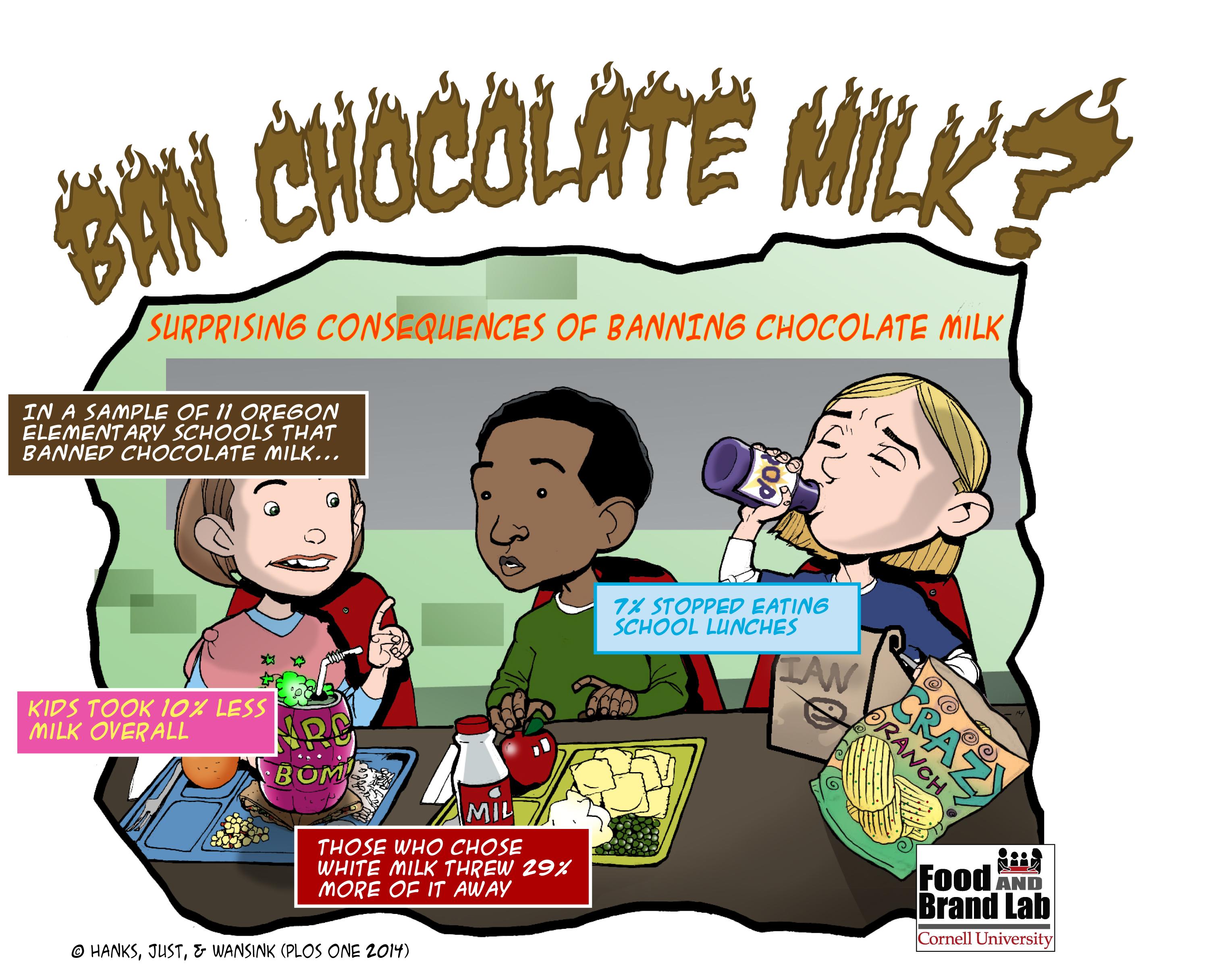 In a recent article published in PLOS One, Drs. Andrew S. Hanks, David R. Just, and Brian Wansink, researchers for the Cornell Center for Behavioral Economics in Child Nutrition Programs (B.E.N. Center), reported results from data collected at 11 elementary schools where chocolate milk had been banned from the cafeterias and replaced with skim milk.  Members of the school district’s PTA were adamantly opposed to offering chocolate milk in the cafeterias, claiming it was as bad as soda.  While this policy does eliminate the added sugar in chocolate milk, it also introduces a new set of nutritional and economic consequences.

In their article, Dr. Hanks and his research team found that eliminating chocolate milk from the elementary schools decreased total milk sales by 9.9%, such that 30 fewer students were taking milk.  While this means that 90.1% of previous milk sales were recovered as children took either 1% white or skim 71.4% of students were taking milk compared to 77.8 prior to the ban.  Even though total milk sales mostly recovered, students taking milk wasted an additional 29.4%, increasing the cost of the additional white milk taken by 10%[1].  Nutritionally, after the milk substitution, students on average consumed less sugar and fewer calories, but also consumed less protein and calcium.

The authors also identified a 7% decrease in number of children purchasing school lunch in the year when chocolate milk was removed from the cafeterias.  Even though removing chocolate milk is not the only explanation for this decline in revenues, such a response to this policy is consistent with theories of psychological theories of reactance.

The 2010 dietary guidelines indicate that 85-90% of bone mass is acquired before the age of 18, and dairy products are excellent sources of calcium and protein.  Removing flavored milk from the cafeterias does offer nutritional benefits such as a decrease in added sugars, yet the economic and nutritional costs warrant reconsideration.  Less restrictive alternatives include making white milk more convenient, attractive, and socially appealing.  This can be achieved by moving white milk to the front of all beverage coolers and making it 1/3 of all milk offered.

[1] Milk waste data were collected using the Quarter-Waste Method and by measuring the amount of milk students poured into a designated milk waste bucket.