In 2012, the first set of new school lunch guidelines were implemented as part of the USDA’s initiative to improve the nutritional quality of school lunches.  Proponents of the policy claim that the new regulations increase student exposure to more nutritious foods – whole grains, produce, and low-fat dairy – though dissenting voices raise concerns of increased amounts of food being thrown away because children simply do not want to eat pizza with whole wheat crust and boiled kale.

To generate an approximate measure of the impact of the regulations, the Cornell Center for Behavioral Economics in Child Nutrition Programs teamed with a large food service company that prepares foods in all types of cafeterias across the nation to measure.  In addition, this power team sought to determine whether or not Smarter Lunchroom Principles, research based methods discovered and championed by the B.E.N. Center, could help decrease the waste that was expected to result from the new regulations. 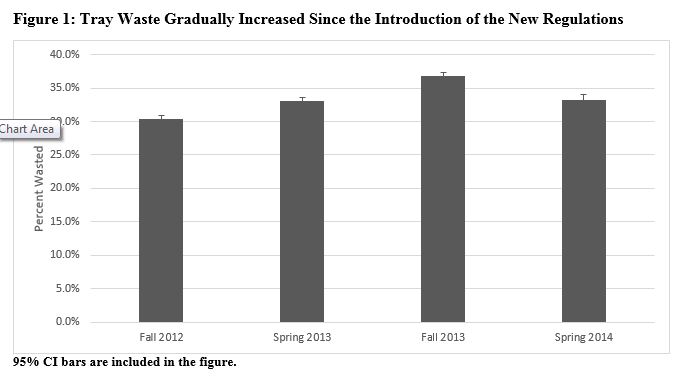 The group began to conduct research in over 30 school districts across the nations in the Fall of 2012.  This research partnership has continued each school semester since.  In the schools, researchers implemented one of the following interventions: giving descriptive names to the vegetables, providing nutritional information for the vegetables, and providing functional information such as the nutritional benefits of the vegetables being served.  In the school in which interventions were implemented, tray waste was collected on one day during a baseline period in which no changes were made, and then collected on three days during the period in which the interventions were in place.

Overall (combining waste in all periods), students threw away about 1/3 of their entire lunch–entrée, sides, and beverage.  If the average lunch costs $2.50 (retail price, not production price), this is about $0.82 being thrown away, per lunch.  With 32.7 million students participating in the school lunch program each day, this equates to nearly $4.84 billion dollars wasted over the course of the 180-day school year.  This is more than 1/3 of the operating costs of the National School Lunch Program. 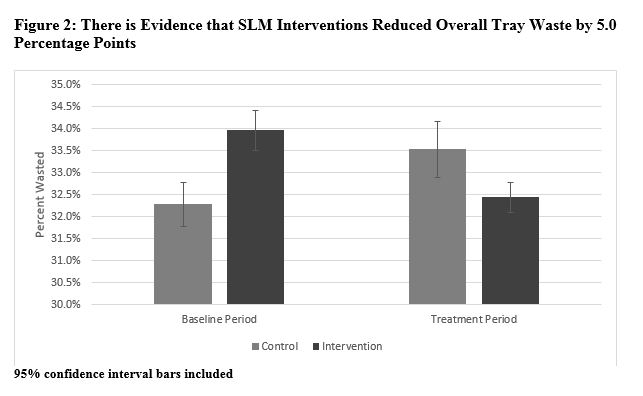 We can also consider a district that serves 2,500 meals a day.  As shown before, estimated daily waste is valued at $2056.25.  This 5 percentage point decrease in food waste translates to a $308.44 daily savings.  Over the course of a 180-day school year, this equates to $55,518, a substantial savings for school lunchrooms.